Motivation
In recent years, the popularity of small satellites increased much. Many cube satellites (CubeSats) are ejected into space every year. Every satellite has a need for communication with ground stations on earth. As antennas on such small spacecrafts have to be lightweight and simple, the creators often rely on simple antenna schemes, often made from measuring tape or small wires.
This often rules out the possibility of using directional antennas for communication. Another problem occurs after ejection: When ejected from the deploying satellite, it is given some angular velocity. Much research has been done in the domain of CubeSat attitude control. Often, this is implemented using passive, magnetic approaches, where Earths magnetic field is used to continually slow down the rotation and eventually making it stop, aligning the satellite in a predetermined attitude towards earth.
This – in combination with the simple antennas used – makes it hard to maintain communication links with these satellites.

See the great picture from the ISS CubeSat Deployer for an illustration:

There it goes! Small satellite deploy yesterday… cool, ah? Nothing personal, but I trust we won't meet again 😉 pic.twitter.com/Zljt4kZrf3

To help with better communication in this first phase of rotation, the LiME experiment proposes a dynamic scheme for communication – based on current satellite attitude. Put in simple words, the satellites can use simple directional antennas and only transmit when these are facing earth. As attitude determination is also a well-researched topic in the CubeSat area, this scheme may help to drastically improve communication in early mission phases of CubeSats.

Additionally, it will be possible to realize satellite missions without any attitude control. For example to investigate the radiation hardness of COTS-electronic components. Furthermore, the dynamic communication scheme might reduce the power consumption, which is a critical point for small satellites.

The scheme is to be designed, implemented and tested on satellite models, ejected from a REXUS rocket in the REXUS 19/20 cycle. The experiment includes analyzing the conditions such satellites face after ejection, deriving a possible transmission scheme and evaluating it with regards to possible communication links.

Procedure
In the picture below, you can see the main procedure of the LiME experiment: 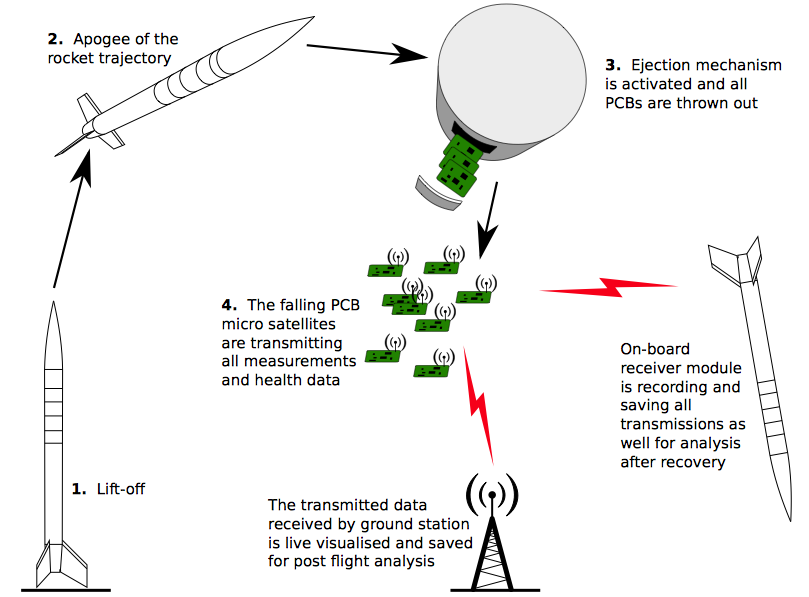